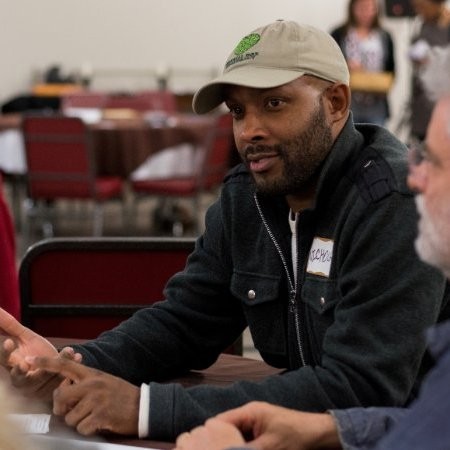 May 30, 2018 — Jamahl Butler has been named the new District Ranger for the Angeles National Forest Los Angeles Gateway District, which includes the Arroyo Seco. Butler has recently served as the Acting District Ranger following the untimely death of Bob Blount. Jamal has worked for the US Forest Service for eight years and has an impressive background in and dedication to ecological restoration and conservation.

The Los Angeles Gateway District is the new designation for the portion of the Angeles National Forest that is not included within the San Gabriel Mountains National Monument. The new name was adopted as part of the reorganization of the Angeles National Forest after the establishment of the national monument. The district covers most of the western section of the forest as well as much of the heavily used front range of the San Gabriel Mountains. The Los Angeles Gateway District Office is located at 12371 N. Little Tujunga Canyon Road, Sylmar, CA 91342 and can be reached by phone at (818) 899-1900.

Presently Acting District Ranger on the Los Angeles Gateway Ranger District, Jamahl has worked a total of more than eight years for the US Forest Service (FS). As a practicing Silviculturist and Forest Ecologist, his persistent focus has been ecological restoration and conservation. Prior to his current position Jamahl was the Conservation Director for Memorial Park Conservancy (MPC). MPC is a non-profit land steward in Houston, TX for one of the largest and most heavily used city parks in the country. While there, Jamahl was the primary point of contact for all conservation related fundraising and public relations matters. Jamahl began his work with the FS in 2000 on the Sequoia National Forest as a member of the trails crew, and transferred to the Angeles National Forest (ANF) in 2001. Shortly after arriving at the ANF he completed a Bachelor's degree in Forestry at Mississippi State University in 2002. In 2012 he obtained a Master's degree in Natural Resource Management from Utah State University. He spent the next two years as the Central Area Stewardship Forester with Utah Department of Natural Resources, Division of Forestry, Fire and State Lands. In this role, he managed and coordinated all aspects of private forestry, including consulting, forest health improvement and urban forestry. Since returning to the Angeles, Jamahl has served in a variety of Acting assignments, including Acting Public Affairs Officer and Acting District Ranger. Although born in Alabama and raised in Arkansas, Jamahl considers California home. As an avid hiker, mountain biker, and sports fan, he attributes his easy transition to life in Los Angeles to a lifelong commitment to enjoying the journey.

I'd also like to take a moment to thank the panel for their committed service in the selection process as well as thank Lisa Salazar and Theresa De La Torre for the always timely and highly appreciated support in the hiring process.

Caring for the land and serving people