Mr. Tsai received his law degree along with a Certificate in Environmental and Natural Resources law from Lewis & Clark Law School in Portland, Oregon. While in law school, he served as Managing Editor of Environmental Law review, the nationĺs oldest law review dedicated solely to environmental issues. He also served as Air Quality Coordinator for the Northwest Environmental Defense Center. He received his undergraduate degree in International Relations from the University of Southern California.

Mr. Tsai worked as a policy advocate and researcher on international peacekeeping, environmental justice, pollution control, and climate change issues. During that time, he worked at the United Nations Institute for Disarmament Research, California League of Conservation Voters, Taiwan Environmental Action Network, and the Fund for Public Interest Research.

Christina M. Caro is a public interest attorney with extensive environmental and civil litigation experience. Ms. Caro obtained her J.D from Golden Gate University School of Law in 2007, and has a B.A. in International Relations and Environmental Studies from the University of California at Berkeley.

Ms. Caro has clerked for both grassroots environmental organizations and local agencies, including the Sierra Club, Earthjustice, and the San Francisco City Attorney Energy and Telecommun-ications Team. Her passion to practice environmental law derives from a desire to better both the human condition and the natural environment, and to do so by working with community-based organizations and disadvantaged members of the public to alleviate environmental and personal harm.

Attorneys Mitchell M. Tsai and Christina M. Caro filed the lawsuit against the Los Angeles County Flood Control District on December 11, 2014. After that, the hard work began, painstakingly going through the extensive administrative record and monitoring the regulatory permitting issues and process.

Our case has been assigned to Judge Luis Lavin, a senior jurist in Department 82 of LA Superior Court. In February a mandatory settlement conference was held to explore whether an agreement on the sediment removal program could be reached without going through a trial. No settlement was reached.

The Project is engaged in both federal, state, and local permitting processes before it can be moved forward in order to mitigate its impacts to water quality, wildlife, and local traffic. In particular, the Project will be required to receive permits from the Army Corps of Engineers, Los Angeles Regional Water Quality Board, United States Fish & Wildlife Service, California Fish & Wildlife, and City of Pasadena.

Issuance of the permits requires additional environmental review both under the federal National Environmental Policy Act as well as the California Environmental Quality Act as the Flood District's original EIR failed to fully analyze impacts to water quality and wildlife, by instead improperly finding that any potentially significant environmental impacts would be mitigated by yet to be known permit conditions.

There will be a public comment and hearing process for these permits and we will likely need your support. Stay tuned.

County flood personnel have been noted surveying the Hahamongna basin in recent weeks. The scheduling of a court date will depend on Judge Lavin's schedule, but we don't expect a trial date before the summer. Meanwhile our legal team is preparing for the trial and tracking regulatory permitting issues.

We will keep you informed with regular updates.

Pasadena Audubon and the Arroyo Seco Foundation were very pleased by the broad-based community support for our Indiegogo campaign to raise funds to cover legal expenses for our lawsuit to take on the County horrendous plan for Hahamongna and our neighborhoods. Thank you to the more than 200 individuals and groups who made the campaign an overwhelming success. We exceeded our $25,000 goal by 34%, with a total of $33,976 raised.

To all contributors, your perks are on the way along with our gratitude.

Want to Understand the Issues Better?

View the news briefing held to announce the lawsuit. Click on the picture. 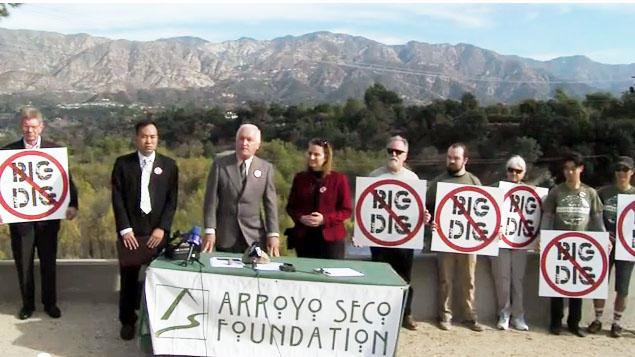 How You Can Help