Trout Restoration in the Arroyo Seco 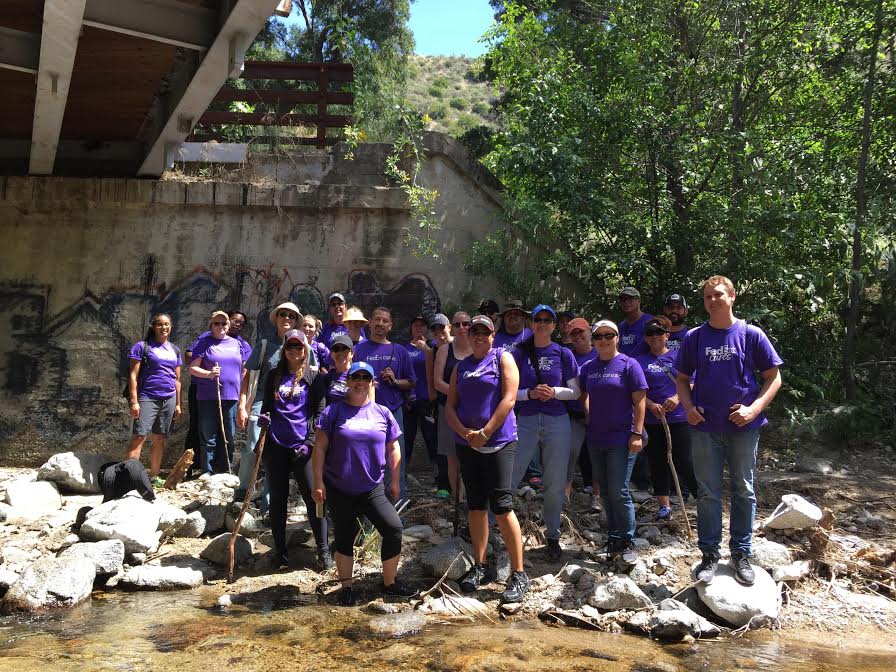 May, 2017 - Forty-four volunteers from FedEx Cares assisted the Arroyo Seco Foundation with a stream habitat assessment and mapping of invasive plants species in the Arroyo Seco Watershed, a major tributary of the Los Angeles River. This field assessment was completed as a part of the Arroyo Seco Foundation’s Native Trout Restoration Project. The overarching goal of this project is to restore, protect and enhance habitat for aquatic plant and wildlife species, especially native trout whose historic range and population in Southern California have been severely reduced. These volunteers completed several major tasks central to the project including measuring and recording stream temperature, stream depth, invasive plant communities and the presence of any major barriers to fish passage.

The Arroyo Seco stream, which is part of the Los Angeles River system, was once a steelhead stream, home to anadromous fish that would travel back and forth between the mountain watershed and the Pacific Ocean thirty-five miles away. The construction of Devil’s Gate Dam nearly one hundred years ago and subsequent flood structures destroyed the conditions for the steelhead, which is now federally listed as an endangered species, but native trout still exist in the San Gabriel Mountains watershed. In recent years extremely dry conditions resulting from California’s long drought have aggravated the conditions for the native trout and other aquatic species in the Arroyo.

Another key component of this event was to identify and record habitat conditions of two areas of the upper watershed - the Switzer Falls area near the top and Gould Mesa several miles further south. The main habitat features that volunteers honed in on were the presence of in-stream boulders, tree cover over the stream, stream bank conditions, and the presence of gravel beds that rainbow trout used to spawn.

These energetic and enthusiastic FedEx volunteers made this event a great success and gathered important data for the Arroyo Seco Foundation. This data and habitat assessment will continue to be a helpful baseline tool for us as we move forward with our conservation efforts and the goals of the Native Trout Restoration Project. FedEx is a contributing sponsor of the program, which is funded by the National Fish and Wildlife Foundation.