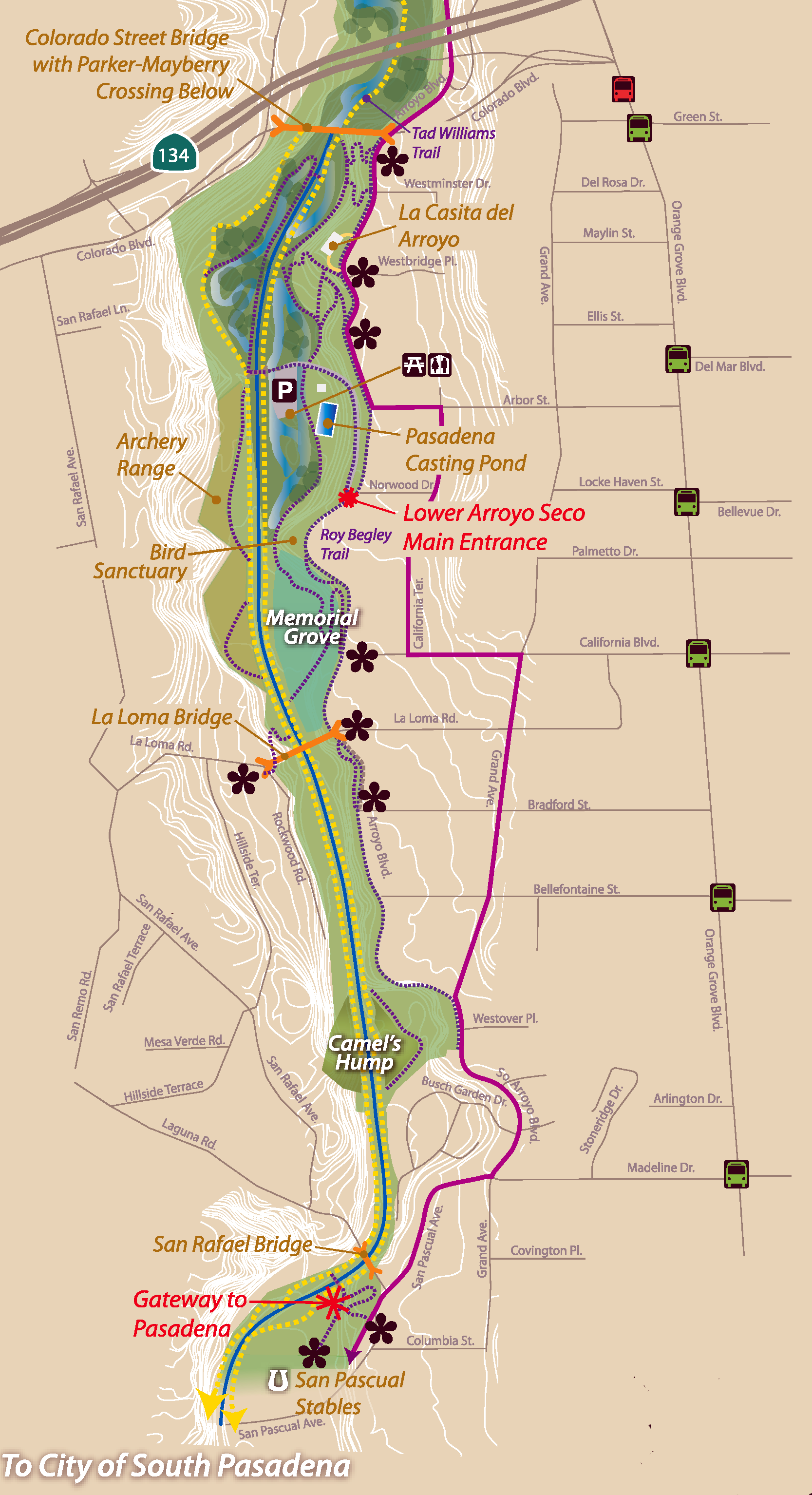 The Lower Arroyo Seco in Pasadena

The Lower Arroyo is the southernmost section of the Arroyo Seco within Pasadena city limits. This area extends from the renown Colorado Street Bridge 1.5 miles south to the border with South Pasadena. Pasadena has officially designated this area a nature preserve, the only one in Pasadena. The Lower Arroyo is a wonderful place to take a walk and enjoy nature.

The Arroyo flows between steep canyon walls in this stretch and is predominately open, wild, natural and lush with habitat. Like most of the urban Arroyo Seco, the river in this area is contained within a massive concrete channel that was constructed by the Los Angeles County Flood Control District soon after World War II. Up the steep Arroyo slopes and out of the natural setting of the river are streets lined with spacious, single family homes, many of them in the historic Craftsman style. Although this area is home to a wide variety of popular recreation, it is primarily "passive" or nature-based recreation.

Take a Walk in the Lower Arroyo —
Refresh Your Spirit

The Lower Arroyo Seco is home to a large variety of wildlife, including birds, mammals, reptiles and bugs. The steep canyon of the Lower Arroyo has limited development within the floodplain of the Arroyo. The exceptions are a dozen or so residential parcels in the Busch Gardens neighborhood, formerly a park used as a marketing vehicle for Anheuser-Busch.

Human influences have significantly altered the plant communities, vegetation and wildlife of the Arroyo Seco, and the Lower Arroyo is no exception. Over the past few decades, considerable restoration activities have taken place in the Lower Arroyo. Most notable is the 1990s BFI project that created low-flow streams on each side of the main Arroyo River channel, but has now fallen into neglect. A bit further south on the east side of the channel, the Memorial Grove, which was established in the early 1990s, restored many acres of native habitat near the California Boulevard pedestrian entrance.

In the more-disturbed sections of the Lower Arroyo, nonnative, introduced annual grass and forb species can be found including ripgut, red brome, mustards, gilias, peppergrass, Mediterranean grass, star-thistles, vulpias and more. Landscaped vegetation can also be found in the Lower Arroyo and is largely composed of ornamental, horticultural trees, shrubs, and forbs. Many of the introduced and invasive species inhibit the growth of more beneficial natives species and the birds and wildlife that depend on them.

The City of Pasadena leases land to several recreational facilities. A casting pond for fly-casters is located near the main parking lot and has been home to the Pasadena Casting Club for more than 50 years. The casting facility includes a restroom and picnic area available for use by all park patrons. Across the river channel to the west, the Pasadena Roving Archers uses about 18 acres of the area for archery. La Casita del Arroyo, a real gem of the Arroyo, is a public facility used for meetings, weddings and celebrations. This historic facility also includes a demonstration garden maintained by the Pasadena Garden Club.

At the top of the Lower Arroyo Seco, the river flows down from the natural, unchannellized stretch between the Holly Street Bridge to the Colorado Street Bridge into the deep concrete channel via a diversion/spillway referred to by old-timers as the "slime slide." The Los Angeles County Department of Public Works has an easement for the flood control channel extending 25 feet on each side. The concrete river channel is roughly 45 feet wide and ten feet deep, with vertical walls topped off by a chain link fence.

The flood channel has been controversial almost since the day it was built following World War II. The channel is not only intrusive in this natural preserve, but it inhibits natural riparian habitat, obstructs groundwater recharge, limits wildlife connectivity, and hinders river crossing for people and wildlife.

Why Not a Living Stream Once Again?

Extensive utility infrastructure runs adjacent to or crosses the Lower Arroyo Canyon. Two water mains serve the surrounding neighborhoods, and one main provides water for landscaping, recreation and fire suppression. Storm drains enter the Arroyo Seco throughout its urban course, including eleven in the Lower Arroyo Seco reach. A distinctive feature of the hiking trails in this area are the brick sewer mains that follow Arroyo Blvd. Power lines also run overhead along Arroyo Boulevard and into the recreation facilities.

The Lower Arroyo is the site of three impressive bridges. At the top is the Colorado Street Bridge (1912). Eight-tenths of a mile south is the recently refurbished John Van de Kamp Bridge, previously known as the La Loma Bridge. On the southern edge is the stately San Rafael Bridge.

One parking lot is available in the Lower Arroyo area at the Arroyo Blvd and Norwood Drive entrance. This lot, made of decomposed granite, fills to capacity during peak hours, resulting in park users using neighboring streets as overflow parking. A bathroom is available for public use near the casting pond. An additional city-owned parking lot with 40 spaces is located at La Casita del Arroyo but is usually closed to public use. Parking is also available at the southern entrance near San Pascual Stables.

Pedestrians and equestrians can access the Lower Arroyo Seco from the north along the trail from the Central Arroyo and from a maintenance road under the Colorado Street Bridge. Access from the south is available from the trails at San Pascual Stables in South Pasadena. Including access from adjacent neighborhoods, there are eleven total access points for pedestrian and equestrian users of the park.

The Lower Arroyo is a living, dynamic outdoor laboratory for many schools, environmental groups, hobbyists, bird-watchers, dog-walkers and environmentalists. Often times groups can be found on tours of the area learning about the wildlife, plants and water resources. School groups range from very young students just learning about the basics of natural processes, to undergraduate and graduate students learning in depth about ecology, hydrology and much more.

Protecting and restoring the rare and resplendent nature of the Lower Arroyo has long been a goal of local residents and public officials. The area has been identified by hydrologists as one of the best sites for urban stream restoration in nation because of its open expanse and the absence of structures that would be damaged by floods.