News of the Arroyo


The eucalyptus, and I swear I'll be proficient in spelling the word by the end of this piece, we're most familiar with in California is one species of the 600 types of eucalyptus: Eucalyptus Globulus, also known as Blue Gum in horticulture slang.

During the 1800s, when humans were much better at destroying habitats and deforesting the planet than they are today, because, you know, nearly zero environmental regulation/concern back then. In the name of expansion and the grand old manifest destiny, California, and America overall, had deforested so many of its native and old growth trees, times were getting tough to continue development with depleted resources. Enter Southern Australia and Tasmania, which bore an ostensibly simple solution: a wood that grew fast, was robust and as the Independent puts it:


“On an economic level, many early promoters believed the eucalyptus could be used for making a number of materials: timber, fuel, medicine, wood pulp, honey, and both medicinal and industrial oils. Not only could eucalyptus grow quickly in many conditions, but, in several species, when the tree’s cut down even to the roots new stems sprout back up.”


What could go wrong?

California legislature passed an economically incentivized 1868 bill, the California Tree Culture Act, which pressed Californians to plant more trees for economic viability, paying landowners $1 per tree planted and nurtured for 4 years. Since mid-sized eucalyptus Blue Gum may grow 60' in as little as six years and with the incentives out there--enter the champions of the Blue Gum.

The California public, particularly individuals who had acreage, started planting massive tracts of Blue Gum. But there were two individuals who truly championed and promoted eucalyptus we'll discuss: Ellwood Cooper and Abbot Kinney. You've probably heard of the latter, who developed Venice California and whose name holds the main avenue through Venice CA, Abbot Kinney Blvd. (one of the best streets in LA for that matter). Let's discuss these gentlemen further.


"What have I done?" Ellwood Cooper, here looking scared. Source

Cooper, an avid horticulturist, lived just outside Santa Barbara and in 1872 he planted over 200 acres of eucalyptus, there was going to be a mighty need for the massive economy that would of course be there demanding more and more Blue Gum wares.

Of course the demand will be there.

Cooper published a monograph titled "Forest Culture and Eucalyptus Trees" in 1876. That blue link leads to the scanned Google books version, which is now public domain.

Here's an excerpt from his book that helped propel Cooper's undying need for California to embrace the euc:

“...he saw the desert retreating before this colonized tree, and, speculating upon the incontestible fact that the forest created humidity and changed the hygrometrical regime of a country ... conceiving the idea that the great Sahara Desert could be reclaimed by planting this tree. ”

HEY EVERYONE, don't worry about that desertification problem--I GOT THIS. We'll plant a bunch of eucalyptus.

Cooper also promoted the trees as windbreaks, which is actually something they do quite well, with the exception of their branches snapping off and killing people from time to time. True story. 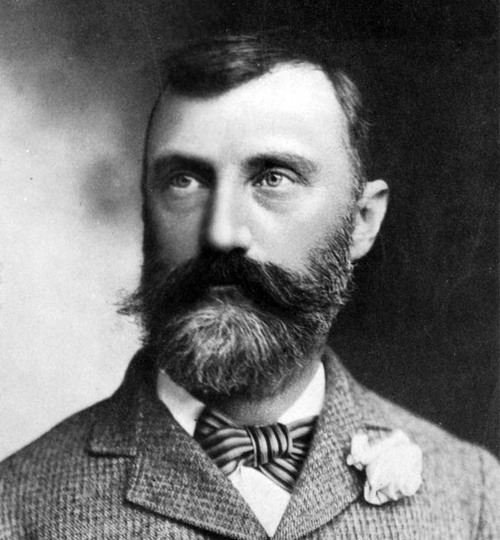 Dude could grow facial hair as easily as a stand of Blue Gums. Source
Abbott Kinney


“Kinney’s advocacy sparked a new wave of interest in the tree that, fueled by a 1907 U.S. Forest Service warning about a shortage of Appalachian hardwood, soon grew into a speculative bubble in eucalyptus timber. Fantastical rumors of 500-foot eucalypti were repeated as fact. Visions of eucalyptus houses, furniture, telephone poles, and wagons — not to mention immense profits — abounded.”

The late tobacco heir became state forester from 1886 to 1888 and promoted the hell out of eucalyptus, handing out free seeds and everything. He also wrote a book about the tree in 1895. As you can imagine, he, like Cooper, felt this cash crop was going to be a massive boon for the California economy. And at the time, California, especially southern California, was a largely treeless landscape, so having eucalyptus grow so well easily changed the look of the state almost instantly. As Kinney continued to promote and plant the tree, eventually the prods woke the sleeping giant, the California public.

In 1909, over twenty thousand acres of eucalyptus were planted. Farmers turned over seasonal crops into large stands of Blue Gum.

Thanks to deforestation and depletion of Appalachian hardwood resources, investors and farmers looked to eucalyptus for a solution to bridging the shortage. It was the makings of a speculative bubble, because, keep in mind, although there were some benefits the tree brought, no one really knew how well the trees would work for use as building materials, railroad ties, furniture construction, etc. all the many, many uses touted by the euc-enthusiasts over the years.

Turns out eucalyptus wood sucks for construction and furniture building, unless the tree is hundreds of years old as used in Australia. The US Dept. of Agriculture promoted this fact and unceremoniously popped the Blue Gum bubble, confirming what many people had discovered: the wood warped, fissured and twisted as it dried. Other materials had to step up to fill the opportunity-deficit: synthetic materials, concrete and steel.

These days, you'll usually find Blue Gum lining farms or ornamentally in gardens/arboretums. Some eucalyptus groves are truly beautiful. I have fond memories of being a child and running for miles in acres of Blue Gum in the Nipomo Mesa forest. The one great practical use for these giant weeds turns out to be their windbreak quality. Today, you'll find the trees functionally lining the US-101, adjacent to farms, breaking the wind and halting migrating dust.

Though Eucalyptus oil is still commonly used in cough syrup, it's also used for its antiseptic properties, the trees are described by Kinney in his book as having an anti-malarial property--as the trees drink mosquito breeding cesspools. Obviously, cesspools are no longer an issue for modern day waste-water management. And furthermore, though Kinney hypothesized the oil had antimalarial attributes, the vexing issue held: Australia has massive eucalyptus forests and malaria within those forests. So the issue is more complex than simply a snake oil cure-all solution. Another great thing about eucalyptus oil? Highly flammable. Explosive even. The trees actually like fire, as it helps spread their seedpods and kill off competitors.

But be careful, because eucalyptus bark and leaves, and consequently eucalyptus oil, are toxic if ingested or absorbed through the skin at high doses. It’s especially poisonous to cats.”

Anyone who has lived next to an eucalyptus tree knows how voracious the roots are. Eucalyptus trees are insatiable drinkers. Their root structures penetrate sewage, wastewater, above ground planters, irrigation lines, basically anything that has a source of water, the Blue Gum will Ocean's Eleven a way into the source. Municipal and regional agencies throughout California cut down the trees in huge quantities every year, yet the trees continue to reseed themselves and further the California eucalyptus legacy. The tragedy here is that unlike Australia, California doesn't host any mammals that have adapted the hearty stomach to prey on the trees, and native species here find the tree leaves and bark poisonous. Rest assured, the eucalyptus trees are going to remain a centerpiece for the Southern California landscape for many years down the line. Next time, can we please bring along some koalas. Just kidding.