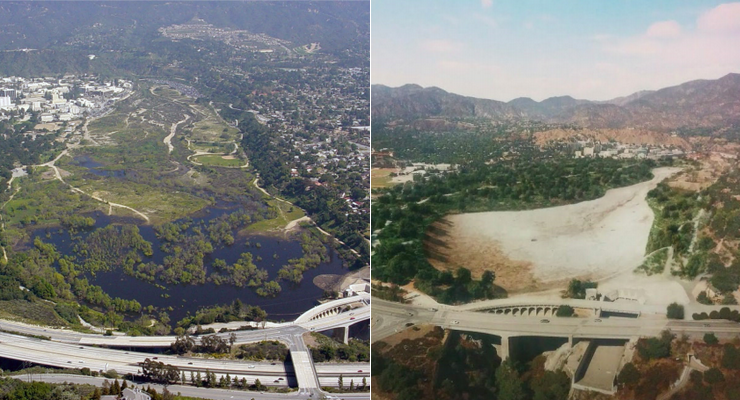 Images show Hahamongna pictured before the "Big Dig" sediment removal project, and what it could look like after the project's completion. Images courtesy Tim Brick.

Today, October 16, 2018, is the 25th Anniversary of Hahamongna Watershed Park, which was established in 1993 by Pasadena when the County of Los Angeles abandoned Oak Grove Park. After an extensive community-involvement process, Pasadena expanded the park and its scope to include all the city-owned land in the Arroyo Seco north of Devil’s Gate Dam and christened it Hahamongna Watershed Park.

Hahamongna, “Flowing Waters, Fruitful Valley” in indigenous parlance, is that rare spot in the Arroyo Seco where the mountainous watershed meets the urban plain. It is the connecting link between the San Gabriel mountains and the Los Angeles River. A gentle stream, periodically punctuated by a flood, flows into this basin, nourishing five unique habitat zones that characterize only alluvial canyons near the mountains. Most sites like this in Southern California have been destroyed.

Hahamongna Watershed Park was established to show respect for the earliest settlers of our region and to celebrate this precious environmental treasure by promoting stewardship of its invaluable natural resources.

Almost one hundred years ago, the newly-formed Los Angeles County Flood Control District built Devil’s Gate Dam here. It was the County’s first dam, a single-minded engineering experiment that ignored the damage caused to fish and birds, wildlife and nature, as well as the long-term sediment maintenance that would be necessary. The legendary steelhead trout would no longer flourish in the Arroyo Seco, a major tributary of the Los Angeles River.

In 1985 Pasadena established a citizen-driven strategic planning process that identified school improvements and Devil’s Gate environmental restoration as the two most promising and important projects to make Pasadena a greater city by the year 2000.

At that time the two hundred acres north of the dam were cluttered with gravel operators, manure processors, trucks and heavy-duty equipment parked in asphalt parking lots. The disc golf course had started there in the early 1970s on the west edge in the thirty-acre, low-key County Oak Grove Park. Stark water spreading basins, which usually were dry and weedy, lined the east side of the canyon. Despite its importance, it was a shabby wasteyard.

Tom Underbrink, a Pasadena Water & Power engineer, initiated and coordinated the Devil’s Gate Advisory Committee and the Devil’s Gate Multi-Use Project (DGMUP). He directed key technical studies that lead to the rehabilitation of the dam in the mid-90s and a master plan for a sustainable future. He also staffed the Devil’s Gate Joint Powers Planning Authority, which released a park plan in 1992 with thoughtful governance and funding components.

Los Angeles County has never recognized the significance of what Pasadena did when it established Hahamongna Watershed Park in 1993. They refer to the area as Devil’s Gate Reservoir and ignore the fact that their hundred year old flood easement in now in the middle of a Pasadena nature preserve. They have also failed to remove any significant amounts of sediment from behind their dam since 1994.

As we observe the 25 Anniversary of Hahamongna Watershed Park, the County’s bulldozers and trucks, 425 a day, are lined up, ready to tear into the basin and destroy the most precious environmental zone in our area by digging a massive fifty-acre pit in the middle of the streamzone and stripping it of vegetation each year.

Pasadena set up a Sediment Working Group that fashioned an ongoing sediment management program that would dramatically reduce the impacts of the County’s long negligence, and the City Council unanimously approved those recommendations in 2014. Since then, however, Pasadena’s elected leadership and staff have remained remarkably passive in defending the Hahamongna dream. The City failed to join the lawsuit filed by the Arroyo Seco Foundation and Pasadena Audubon Society to implement the Pasadena alternative, and the staff has failed to engage with the County to work out even minor changes in their draconian program.

Last November County Supervisor Kathryn Barger amended the County’s plan to reduce the amount of sediment to be removed from 2.4 million cubic yards to 1.7 million, the original amount the Flood Control District sought, but that amendment did not change the number of trucks per day, the horrendous level of air pollution, or the permanent deadzone in the middle of Hahamongna that the County plans.

Hahamongna is our Walden Pond, the unique natural area that local residents can go to to discover nature and ourselves. Its rich natural resources feed the vitality of our region. It is one of the last remaining alluvial canyons and key wildlife corridors in our County.

When the County’s bulldozers begin their desecration, the public will be horrified. What a wretched way to shatter the Hahamongna Dream. What a shameful legacy to leave to future generations.