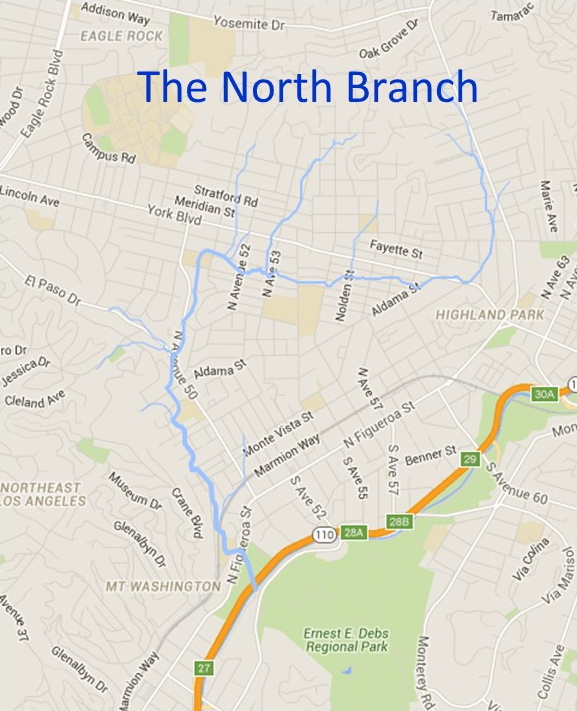 The North Branch is a major tributary of the Arroyo Seco, which in turn is a major tributary of the Los Angelea River. The watershed drains a large part of Highland Park in Northeast Los Angeles. Traces of it can still be seen there in the canyons and ravines that line the area. In the 1930s, the water flow from rain and storms was diverted into a large box culvert buried deep beneath the park.

The Importance of the North Branch

From Stream to Sewer

The BOS refers to the project in Sycamore Grove Park as the Figueroa St. Low-Flow Diversion. The planning and environmental documentation were slipped through the public review process in the summer of 2020 with very little public notification or outreach. In fact, we have not found anyone who was aware of the project until construction began. Did you know?

BOS says that this project will help clean up the Arroyo Seco stream, there are better ways to achieve that objective using nature-based treatment and public education.

Unless we stop it, this will be the last nail in the coffin of one of Highland Park's greatest natural treasures.

The Highland Park area was particularly rich in a hydrologic sense. A major tributary of the Arroyo Seco, called the North Branch, flowed for six miles through northeast Los Angeles from the Annandale area of the San Rafael Hills near Poppy Peak. The stream flowed along Figueroa Street to Branch Street and then Aldama Street flowing into the Arroyo Seco at Sycamore Grove Park. The North Branch was fed by a series of healthy springs including Springvale and Glen Rock Springs. There were also numerous springs in the area about York Boulevard and Figueroa Boulevard and along Sycamore Grove Park.

What Happened to the Stream?

Learn about the remarkable community campaign to restore the North Branch and upgrade Sycamore Grove park seventeen years ago.