January 24, 2018 — Priyanka Wadhawan of the US Army Corps of Engineers presented the latest update on the Arroyo Seco plan and outlined next steps in a presentation to the Council of Arroyo Seco Agencies (CASA).

November 7, 2017 — Supervisor Kathryn Barger's amendment to the County Flood Control District's sediment excavation and trucking program for Hahamongna also included a provision reestablishing the County's partnership with the US Army Corps of Engineers and local cities to complete the long-delayed Arroyo Seco Ecosystem Study. The amendment was approved unanimously by the five members of the County Board of Supervisors.

January 15, 2017 --After promising in November that the Corps would release its Tentatively Selected Plan for Arroyo Seco ecosystem restoration on February 15, USACE has now announced that they need additional funding to complete the Tentatively Selected Plan. They have asked the local sponsors, including the lead local sponsor LA County Department of Public Works, and the Cities of Los Angeles, Pasadena, La La Cañada Foothill and South Pasadena to pony up an additional $3 million to complete this key phase of the program. County Public Works and the other local sponsors have not yet indicated how they will respond.

The County of Los Angeles Department of Public Works will hold a workshop in Pasadena on Tuesday, November 15 to facilitate public input on the US Army Corps of Engineers Arroyo Seco Ecosystem Restoration Feasibility study. The workshop will highlight a series of visionary alternatives for Arroyo restoratio prepared by the Corps. The public is encouraged to attend and to advocate for the most comprehensive ecosystem restoration program possible.

August 2016 -- There's been another delay in the long-delayed US Army Corps of Engineers Arroyo Seco Ecosystem Study. Last year (2015) Army Corps staff promised at several public meetings that alternatives would be released for public review in March of this year. As recently as April 28, Corps officials announced that their draft study, encompassing the Tentatively Selected Plan (TSP), would be available "by July."

Now Corps staff assures us that the TSP will be released in October. While local agencies, including Pasadena, Los Angeles, La Cañada, and South Pasadena, have reportedly been privately briefed on some elements of the Corps' planning for the Arroyo Seco watershed in their communities, there will be no opportunity for interested stakeholders or the general public to consider alternatives before the Tentatively Selected Plan is released.

Representatives of the Los Angeles County Public Works Department, the lead local sponsor of the study, are satistied with the lack of public participation, since local agencies and the public will have the opportunity to adopt a "Locally Preferred Plan," similar to the Alt 20 program adopted by the City of Los Angeles for the LA River, after the Arroyo Seco TSP is released in October.

The Corps' updated Fact Sheet on the project also notes that the federal agency will seek a time waiver to meet the Corps' "SMART" planning compliance, which now requires that project planning and approval be wrapped up by October, 2017.

The Arroyo Seco Foundation recently a letter to Congressman Adam Schiff urging him to direct the Corps to conclude the study and to do so with full public participation.

An almost overwhelming array of restoration alternatives for the Arroyo Seco were presented at a November 15, 2016 workshop in Pasadena. 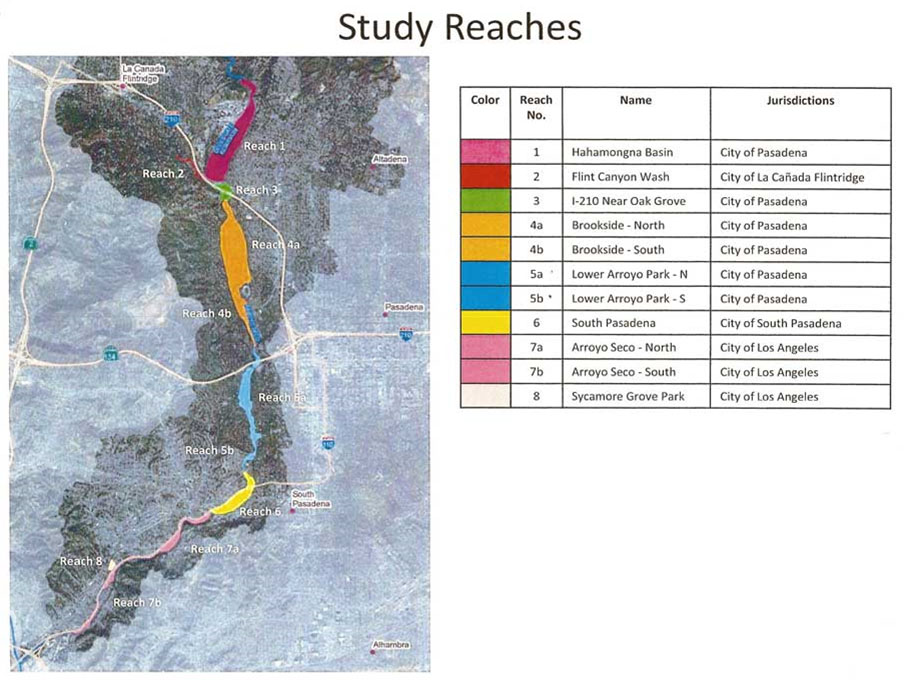 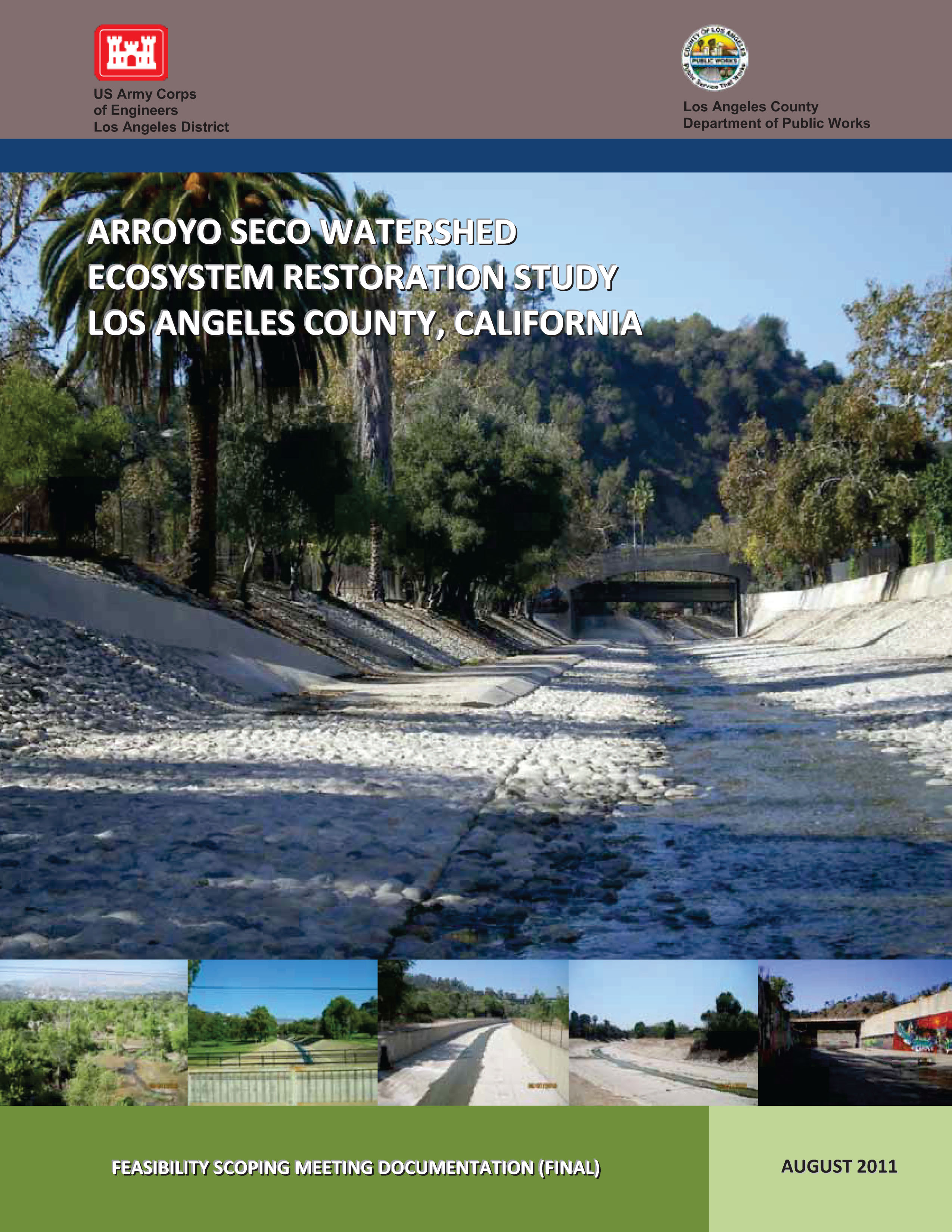 The Arroyo Seco Ecosystem Feasibility Study is a partnership between the County of Los Angeles Department of Public Works and the U.S. Army Corps of Engineers with the assistance of governmental agencies and environmental organizations within the watershed.

This study was originally intended to be a three year study to investigate long-term solutions for water resources and environmental restoration issues within the Arroyo Seco Watershed.

In 2001 the US Army Corps of Engineers (USACE) initiated a watershed study of the Arroyo Seco. The Reconnaissance Study Section 905(b) (WRDA) Analysis, completed in November, 2002, determined: "The future or without project condition of the Arroyo Seco Watershed is a serious concern to the public and the LACPW (Los Angeles County Public Works). The limited and fragmented open space and habitat along the Arroyo Seco corridor, especially in the lower watershed, will result in the continual decline of the environmental and aesthetic quality in the Los Angeles Region. In addition, natural groundwater recharge in the watershed is an important component to water conservation in the Raymond Basin. It is the goal of the watershed study to develop the necessary baseline data and analytical tools, and a realistic set of objectives that will encourage management decisions that help reverse negative trends or enhance positive trends to maintain or improve the health of the watershed. Without environmental restoration in the Arroyo Seco Watershed, the problems identified by the public and local sponsor will continue unabated, these problems include:

The Reconnaissance Study identified a strong federal interest in the Arroyo Seco watershed. "In accordance with current administration policy, there is a federal interest in watershed based studies that provide a holistic approach to evaluating water resource problems and opportunities leading to the development of a watershed management plan that effectively balances the need for sustainable economic development with the need for protection of watershed natural resources. Since environmental restoration is a likely output of the watershed study with a high budget priority and environmental restoration, water quality, flood control, and other related issues are integral to any comprehensive watershed plans that would be evaluated in the feasibility phase, there is a strong Federal interest in developing a feasibility study for the Arroyo Seco Watershed. There is also incidental Federal interest in other benefits resulting from the study such as recreation and water conservation/supply that could be developed within existing policy. Based on the preliminary screening of alternatives, there appears to be potential watershed plan alternatives that would be consistent with the U.S. Army Corps of Engineers policies, benefits, and environmental impacts."

A Blueprint for Watershed Management

In May 2005 the USACE released the Project Management Plan for the study with a revised, trimmed budget of $2.7 million dollars and a scope of work that would develop a comprehensive watershed management plan including implementation projects for the entire watershed from the San Gabriel Mountains to downtown Los Angeles. The plan will include water resources, ecosystem restoration, flood management and recreational elements. Key watershed functions and purposes to be studied include:

In August 2011 the Corps released the Feasibility Scoping Meeting Documentation, which details environmental conditions in the Arroyo Seco and identifies sites for potential projects. This document is a key step toward completion of the Arroyo Seco study.

County Urges Corps to Accelerate and Complete the Study

The Los Angeles County Flood Control District in May, 2013 urged the US Army Corps of Engineers to accelerate and complete the Arroyo Seco Watershed Feasibility Study. On May 8th Gary Hildebrand, Assistant Deputy Director of the County Department of Public Works wrote to Colonel R. Mark Toy, Commander and District Engineer of the Corps, "The LACFCD is willing to accelerate funding to facilitate completion of the Study" and goes on to state, "It is critical that we finalize this effort and move forward with the feasibility portion of the Study, which will allow us to identify potential projects that will benefit the environment and improve the quality of life for the community."

Los Angeles County Flood Control District, the main local partner of the study, propose assuming leadership of the program due to the USACE failure to act in the last five years.

Local communities and stakeholders look forward to the release of the Corps' Tentatively Selected Plan, now that the County has pledged $2.5 million to complete the study.

Everything's on hold awaiting the response from local sponsors to USACE's request for $3 million in additional local funding to complete the Tentatively Selected Plan that was promised to be completed by March 2016.