If you have been waiting to ride the Arroyo Seco Bike Path, wait no more. You don't have to drag that dusty old bike out of the garage or slide into lycra at all.

As the second entry in his award-winning series of video clips on the Arroyo Seco, photographer Nathan Baird-Hu has put together this fascinating video voyage that shows the path from the York Street Bridge all the way to the exit near Avenue 43 in Los Angeles.

Soar down the path from Arroyo Seco Park near the horse stables on the border of South Pasadena and Los Angeles. Then check out the slime-lined stream in its concrete straight-jacket as you travel under several of the bridges of the Arroyo Seco. Recognize the Santa Fe Bridge from below? You hardly even notice the adjacent freeway! Move through the slopes on the edge of Debs Park until you reach the ramp that climbs out of the Arroyo Seco streambed at the Montecito Heights Community Center. It's almost always a fun ride. Maybe you should get that trusty old bike out and head on down there to check it out for yourself, but stay away when it's pouring.

Just click on the button below to start your journey along the Arroyo Seco Bike Path.


A Better Plan for the Arroyo Seco Bike Path 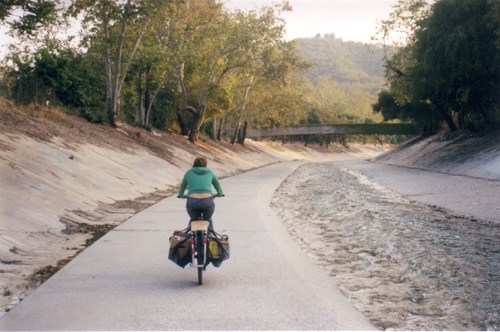