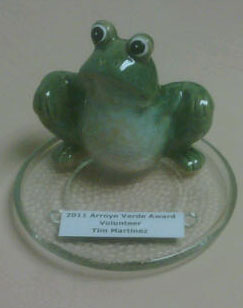 
The Arroyo Verde Awards are this region's most prestigious environmental stewardship awards. Recipients are honored at the annual holiday event of the Council of Arroyo Seco Organizations, which was held in the Community Room of the South Pasadena Public Library.

Laura Garrett, Conservation Chair of the Pasadena Audubon Society, has been a member of the Pasadena Open Space and Conservation Committee, which has worked for more than two years to craft an Open Space and Conservation element for Pasadena's General Plan. On that committee she has shown outstanding leadership for protecting open space, particularly environmentally sensitive areas. She has worked hard to reshape Hahamongna planning to recognize the unique habitat and wildlife values in that basin at the foot of the San Gabriel Mountains and now serves a member of the County of Los Angeles Department of Public Works Long Term Sediment Management Working Group.

The mission of this dynamic student club is to activate, educate and guide Pasadena City College and local young people towards sustainable practices. The club has undertaken a wide variety of education and action projects to fulfill their mission, including compiling a complete video record of the Hahamongna Walkabout event last Spring, which is viewable online. http://www.pccseedsofchange.com/


Greening the Arroyo - Agency: US Army Corps of Engineers

Tim Martinez is an outstanding naturalist and activist who puts his beliefs into action. His presentation on the plants and habitat of Hahamongna was a highlight of Hahamongna Walkabout last Spring https://www.youtube.com/watch?v=UIWyGo_0DyQ. Since then he has taken on the role of Outreach Coordinator for the Arroyo Seco Foundation, staging one volunteer action event and one educational/interpretative event in the Arroyo each month.

Mary Barrie has a long and dedicated record of protecting Hahamongna and the Arroyo Seco. Along with the La Canada Trails Council, she has been involved in building an extensive network of trails through that community linking into Hahamongna Watershed Park from the west. She has been an active member and officer of Rose Bowl Riders, an equestrian group with facilities at Hahamongna. She has been tireless in poring over plans and public documents to ferret out plans to clutter the 250 acre basin at the foot of the San Gabriel Mountains with roads, athletic fields, parking lots and other structures that would detract from its environmental values.

When the County Department of Public Works announced that they intended to clean out the Hahamongna Basin of sediment and flood debris that has accumulated there over the last ninety years without any environmental review process, there was a storm of protest from those who love the Arroyo and fear the massive impacts of such a sediment removal program, which could amount to a stream of 400,000 trucks moving in an out of the basin and nearby residential neighbors for a considerable period of time. Supervisor Michael Antonovich responded to the public concerns and introduced a motion to the Board of Supervisors instructing the County Department of Public Works to develop a full environmental review of the program, while developing a plan for immediate actions that might be necessary to guarantee flood safety. That motion was approved by the Board of Supervisors on March 1 and has set in motion a more thorough and careful planning process to determine the best way to manage flood and sediment in the Arroyo Seco and to reduce the impacts and costs of such a program.

Denis Callet has brought new eyes and vision to the Arroyo Seco, particularly to the Hahamongna area, with his spectacular wildlife photography. His pictures, posted on his website http://dlc-photography.smugmug.com/ and circulated through Arroyo_Seco_News, are truly world-class in their photographic artistry and bring alive the throngs of birds, coyotes, deer and bobcats that frequent the watershed park.

Wilson Lau first came to the Arroyo as an intern during the summer of 2008 where he helped promote and complete the Central Arroyo Stream Restoration Project, which restored the Arroyo Chub to the stream around the Rose Bowl. Then he went back to school at the University of California at Irvine where he earned a Masters in Engineering. In the summer of 2010 he offered to volunteer for Arroyo projects, but was instead recruited to serve as the Arroyo Seco Watershed Coordinator, which he did with great energy and charm until August of this year when he left to pursue his career in engineering.

For many years, wherever there is an important cause or campaign in the Highland Park section of the Arroyo, Ann Walnum has been there. She has served as a board member of the Highland Park Heritage Trust, been active in the Arroyo Seco Neighborhood Council, and promoted many neighborhood cleanups and beautification projects. She has also spearheaded the campaign to save the Southwest Museum, LA's first museum and a real gem of the Arroyo.

KCET's recent Departures series on Highland Park explores the roots and heritage of Highland Park and the conditions that allowed the area to become one of the preeminent cultural and social centers in Southern California. The wonderful visual imagery, interviews and graphical images have highlighted the pivotal role of the Arroyo Seco and Arroyo culture and linked current restoration efforts to the revitalization of the Los Angeles River. http://www.kcet.org/socal/departures/highland-park/


Best Advocacy - To the individual who has made the best contribution in improving policy, programs or funding for the Arroyo.

Greening the Arroyo (Organization) - For the organization that has made the biggest difference in improving the environment in the Arroyo.

Greening the Arroyo (Agency) - To the city or governmental agency that has demonstrated outstaning leaderhip in the stewardship of the Arroyo.

Greening the Arroyo (Business) - To the business or commercial association that has contributed the most to the enhancement of the Arroyo.

Best Volunteer - To an individual who has improved the Arroyo through consistent, dedicated physical labor throughout the year.

Citizen Activist - To an individual who has shown leadership and mobilized others to improve the Arroyo.

Public Official - To an elected or appointed official or govenmental employee who has make an outstanding contribution to the protection and promotion of the Arroyo Seco.

Lifetime Achievement - This award, which is not given every year, is granted to an individual who has devoted considerable energy and enthusiasm to protecting and promoting the Arroyo over many years.