Steelhead in the Arroyo Featured in New Exhibit and Book 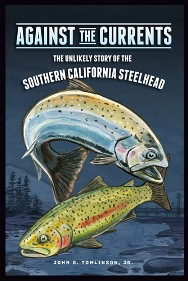 The fascinating story of steelhead in the Arroyo Seco is featured in a new book, "Against the Currents," published by the Aquarium of the Pacific in Long Beach. John G. Tomlinson, Jr., tells the story of Charles Holder of Valley Hunt Club fame and his depictions of this spectacular fish and how it used to frolic in the Arroyo Seco stream.

Steelhead begin their lives as rainbow trout in the mountain watershed and then migrate to the ocean where they make the physical transformation into steelhead. Later they would return to their stream of origin to spawn and die.

The Aquarium of the Pacific has also installed a permanent exhibit on the steelhead in Southern California as part of their watershed exhibit.

There are still native rainbow trout in the mountain watershed of the Arroyo Seco. During flood events some of them reach the Pacific Ocean, but will they ever be able to return to spawn? The Arroyo Seco, as Holder and Tomlinson document, is the most likely stream to restore steelhead in the Los Angeles River system.

Arroyo Volunteers Are Making a Difference

Get involved and bring your firends.